The music of the night 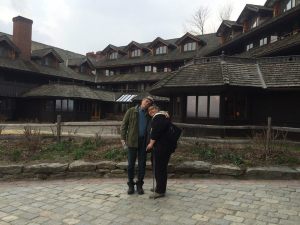 About four weeks ago… maybe more… I caught a bad cold. You know the kind: coughing, chills, sneezing out of every orifice… the kind of ailment that makes a swift and merciful death seem like consummation devoutly to be wished.

One salient feature of this little bug was that I couldn’t breathe when I lay down. Consequently, I started sleeping on the recliner. This was fine at midnight… one… two in the morning… but by three a.m., sciatica would set in, and set my butt on fire. Ancillary cramps would strike, literally curling my toes, and making my legs flail like Bette Midler’s as she kicked her way out of Vicky Eydie’s mermaid costume.

Naturally, this would wake me up, and that’s when I would hear it: the early manifestations of the permawheeze. It wasn’t the usual feeble bronchial whistle, no. This was a symphony of harmonicas, accompanied by a bagpipe. It produced complicated chords, and though its beat was syncopated, it had its own catchy little rhythm.

I would sit in that wretched recliner for hours, listening to the miserable music of my mucus-laden lungs, and console myself with platitudes about patience. Colds, after all, only last a week or two. Once they climb the summit of repulsiveness, they begin to subside, right?

And in due course, the sneezing ended. The sore lips and nostrils healed. The chills subsided.

And I still can’t lie down, or get a full night’s sleep, or walk more than a roomful or two at a time, since my back is in absolute agony.

Now, since I have a thyroid condition, I can’t take conventional cold medicine, so I have to resort to more primitive methods to exorcize this little choir of demons living in my diaphragm. My primary elixir has been the powerful hot toddy, as concocted by wizards at the Trapp Family Lodge in Vermont: Rye whiskey in a cup of boiling water, sweetened with maple syrup and reinforced with the vitamins contained in a spoonful of lemon juice, laced with a naughty peel of lime. Normally, this concoction will open congested lungs as quickly as Draino will open cruddy kitchen pipes, as it helps you forget just how miserable you’ve been.

Did it work on the permawheeze, though? Nope. If anything, it tuned the instruments in my lungs  so their notes became clearer and more assertive. You may surmise that I stopped imbibing toddies, and I have, but not because I lost faith in their efficacy… which I did. I stopped because I dropped my stupid bottle of maple syrup.

You don’t know what despair is until you see a sticky puddle of sweet brown goo flowing across your kitchen floor, liberally sprinkled with glass shards, and realize that you are the one who is going to have to clean it… you with the bad back and the squeaky lungs, who haven’t had a decent night of sleep in nearly a month.

This is what I have become… a wheezy, practically immobilized, imminently alcoholic old woman longing to lie down again in her own flat bed.

It’s not how I’d envisioned my Golden Years.